Thirty years ago… founding companies Golden Belt Telephone, TCT, and Rural Telephone partnered with other telecommunications companies, bringing the first cellular service to Kansas. Back then, it was called Kansas Cellular. Alltel later acquired Kansas Cellular, who was then bought out by Verizon.

Then guess what. As Verizon grew, they, simply put, lost interest in rural America because there wasn’t enough money to be made. So, they started to pull out. They stopped investing in infrastructure, and over time, left their customers with terrible wireless coverage.

So, in 2005… Nex-Tech Wireless launched. With a core belief that Kansans deserve great coverage everywhere, we erected hundreds of towers in our area and formed the necessary partnerships to share thousands of towers nationwide to make sure Kansans who live in rural America get the same great, reliable coverage as someone does in metropolitan America.

Competition is stiff in the wireless world.

We know you have choices and we know you are bombarded with amazing sounding offers every day of the week.

We also know the real story. The one giant carriers don’t tell. Prices might look great, but hidden costs exist that raise the bill. That technology might seem cheaper, but is it really? That data volume might seem great, but is the extra cost for too much really worth it?

Here at Nex-Tech Wireless, we care, and we tell the truth. We assess your current plan and point out the exact areas of improvement or cost savings.

To us, you are more than a customer. You are our friend. Our neighbor.

WE DO offer a detailed analysis of your current bill to make sure your plan is just what you need. Nothing more, nothing less.
WE DO offer customized plans that fit. We are your carrier. Cost effective at every level. Bottom-line.
WE DO keep you connected wherever you are. If work sends you roaming, our rates don’t roam with you. They stay straight and steady. 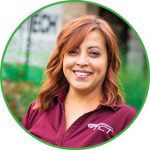 Having been born and raised in a major city, the best part of now living in a rural community is the genuine relationships that I have developed over the years through work. The ability to connect people with friends and family through technology is a highlight for me.

The best part of my job is educating our customers to better understand the devices they choose. We take pride in providing superior customer service and building lasting relationships while working with them on finding solutions that meet their individual needs.